I have a very complicated relationship with donuts (Or doughnuts. Ugg, let’s not even get started on that, okay?), in that I love them so very very much, and I want to always be eating them, but they are not always very good. I will eat pretty much any donut that anyone puts in front of me, so I know a bad donut when I see one. From boston.com, we get the news that Dunkin Donuts, that venerable peddler of pretty-okay coffee and subpar donuts, is rolling out a Peep-topped donut for Easter. Here’s a pic. 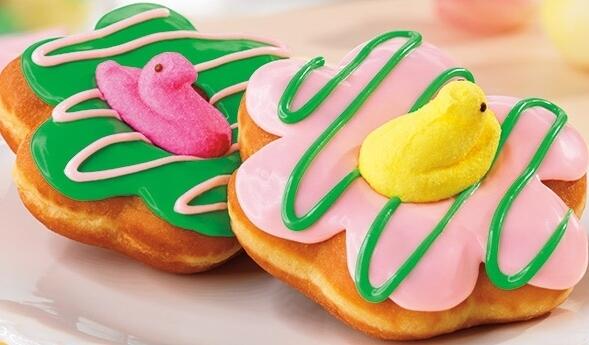 Gross, you guys! Dunkin Donuts’ donuts are not very good, but there is a 24-hour Dunkin within spitting distance of my apartment (because I live in Boston and that’s the law), and when I go there (once a week, on the weekend, as a treat), I always get a chocolate glazed donut, even though I know it’s not going to be very good. And now a Peep-topped donut with “green” flavored icing? I’m helpless before the sugary combo! It’s going to be disgusting, guys! So gross. But I am going to eat one.

(I’m going to add a quick plug for the best donuts on earth, Sweetwater’s Donut Mill in Kalamazoo, MI. Visit any of their three locations for the most delicious donuts on earth. The donuts to which all other donuts are compared and found lacking. Please send me donuts, Sweetwater’s! A dozen Reece’s if you can!!)

Flanny was born and raised in a Detroit suburb, but tells people she's from Detroit without clarification because it makes her sound tough. She is not tough. Her favorite member of One Direction is Louis Tomlinson, and her favorite Agatha Christie detectives are Tommy and Tuppence.
View all posts by flanny →
This entry was posted in Uncategorized and tagged donuts, doughnuts, dunkin donuts, gross, nope, peeps, sweetwaters donut mill, unnecessary, why. Bookmark the permalink.