In which I finally watch a DVD I’ve owned for years, long after doing so could have any meaning. 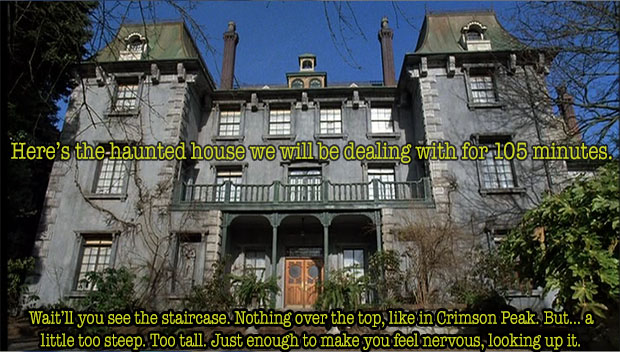 Why Did I Buy It?

Years ago, I saw it on a list of “scariest movies ever” in a book or magazine. This was pre-internet, when lists were rare, so it made an impression. Maybe in Danse Macabre by Stephen King? Good book. Therefore, as soon as Amazon existed, I put The Changeling in my shopping cart. And there it languished, haunting me for decades, a perennial “save for later.” Why’d I actually buy it, though, in March 2016, according to Amazon? Dunno.

Why’d I Never Watch It?

I wanted viewing conditions to be just right. A rainy or windy night, very cold, when there’d be a deeply disturbing noise from down the hall just as I finished watching this.

But I gave up on that dream, thanks to the horrifying mind of Theresa Couchman. So now I know what I’ve been missing…

Things start brutally: Symphony composer John Russell (George C. Scott, in his only movie role) witnesses his wife and daughter get killed. Now I know that some of you are such assholes that even as his family is being killed, your only heartless thought will be: Ugh, typical Hollywood, giving a craggy old guy a cute young wife. Patriarchy etc etc. 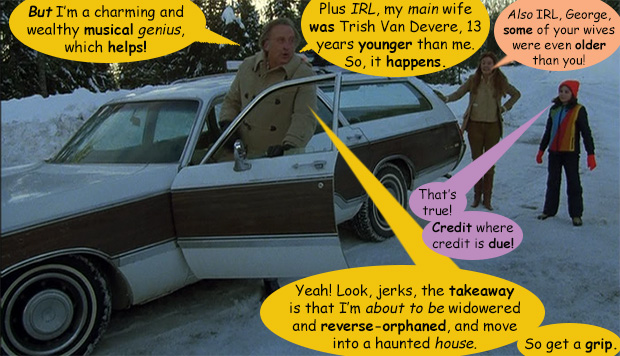 Afterward, as part of his getting-over-the-death-of-the-family plan, he relocates to a mansion outside Seattle where, he says, “I can lock myself in and pound away at the piano.” Okay, let’s hope you political types are over how upset you were about the patriarchy a scene ago, because guess what, we have bigger problems on our hands starting right on Day 1 of this healing-process scenario. 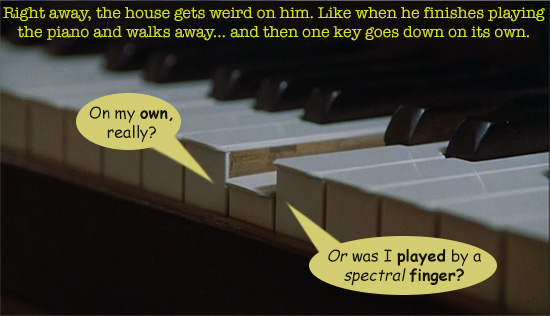 This is just the start of what will turn out to be a lot of weirdness the house is going to roll at us. And I hereby salute this movie’s sound team with a 21-gun salute using the very coolest-sounding guns, because audio does so much here. A thoroughly unsettling atmosphere is built out of what should be ordinary household creaks…

Naturally, we don’t stop at tiny sounds. Soon John Russell goes exploring and uncovers a sealed-up attic room. It is draped in cobwebs, and among other disturbing items he finds a music box… which plays the exact tune that minutes ago he was downstairs composing at the piano. 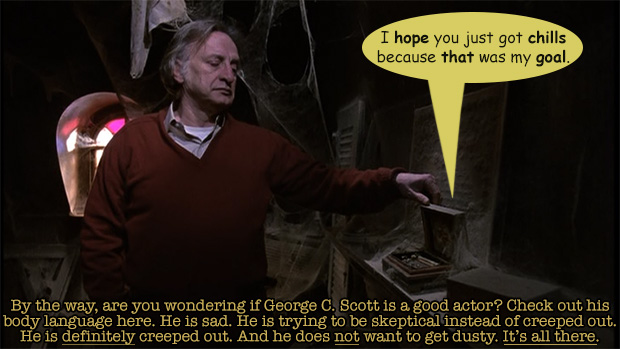 One thing that makes this movie fun is not only the rising tension, but the way Russell and his helper Claire handle it. They immediately conclude there is a ghost. There is no “That’s crazy, let’s not waste time worrying” debate. Nope. There is a ghost, and we better figure out its origin.

Well, okay, that decisiveness seems good at first, but then… 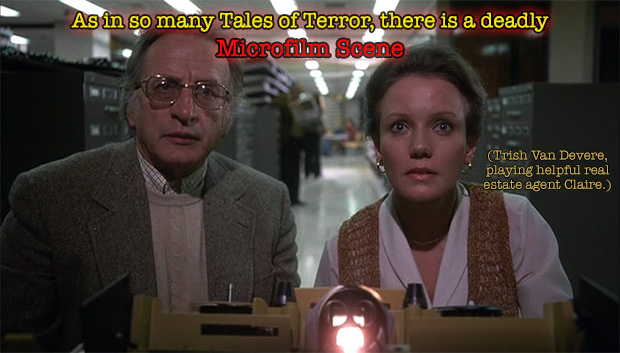 Post-library, Russell concludes the ghost feels an affinity for him because he lost his daughter. This is completely sensible. Claire says, “You need to get out of that house.” He doesn’t, but he does stop sleeping upstairs, resorting to a couch near the front door. I feel like that’s sensible? On some level it’s exactly what you would do. Then, for better advice, he goes to the pros (at a Psychic Research facility).

And now I’m going to shut up. I don’t want to water down your chills when you see this movie. Which you better do tonight. It’s good. I kept asking myself, why isn’t this movie more well known? For a solid hour, the tension never breaks on an overwrought moment, it never steps back; sound, lighting, art direction, music, the low murmured dialog, the fairly charming but deeply depressed John Russell, the near-constant motion of the camera which keeps implying the point of view of someone not seen in the room—all of it comes together so well. And not to be overlooked: a tendency to poorly explain some things and entirely not bother explaining others. Perfect for a story about the unseen. 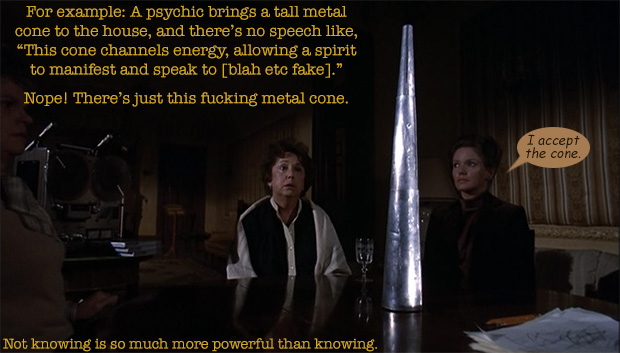 Watch it and you will be stunned how many bigger movies have learned from this one or straight looted it—The Shining, Poltergeist, The Ring, The Others, offhand. None of which achieve the tone this movie owns for an hour: a creepy, sustained uncertainty that feels like it’s trapped under layers of cobweb and helplessness. 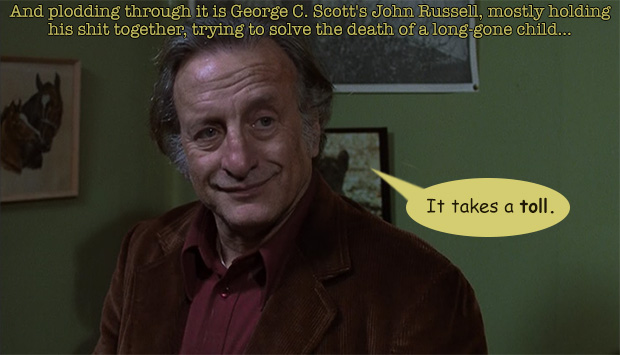 Until… it goes to hell. It really does. Not B-grade horror Hell, where a portal opens in the basement and demons flood out. More like, uh, how do we pay off all this tension? Knife fight? Car crash? Explosion?

Because here’s a hard fact the movie forgets as it winds up: Ghosts are obscure. The more logical your ghost becomes, the more concrete and clear his needs and schemes, the more ludicrous he is. He is breaking the laws of nature. Ghost nature. Supernature? Listen, please just respect your ghost. He is not here to present John Russell with a neat puzzle to solve. He is here because he is a frightening miasma of insanity. Okay?

And because ghosts are irrational, we’d like to get the hell out of the haunted house and watch it burn down. That’d be a relief. But… if we get out too soon… well, that would be a disappointment, wouldn’t it? Because first we do want to pound away on the piano in that house for a while. Poke around. Find secrets. Get scared. Go up the stairs we know we should not. And up there—this movie hinted—we might confront the very worst fact lurking in the house: that we, too, are likely to die wanting more, just like the Presence in the attic did. Is there any puzzle we can solve to escape that? 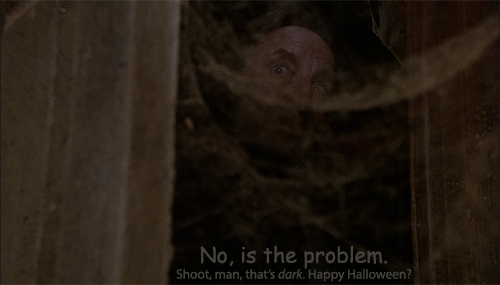 The Changeling loses this thread though. Eventually Russell’s suffering disappears into a big ludicrous clockwork of ghosty machinations, and with him we’re sidelined, watching a secondary drama play out, from a too-reasonable distance. That’s not really a spoiler; it might work for you. Good luck tonight.

And I will say in favor of the ending, though I think it’s mostly fucking dumb, that it looks super cool. 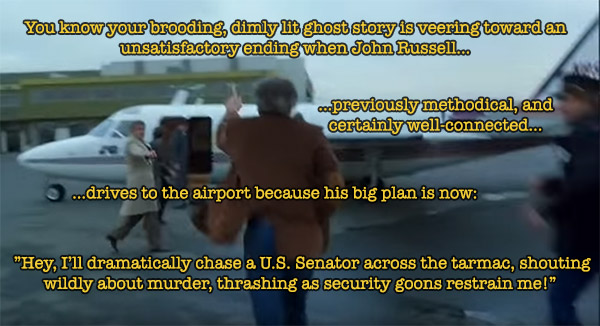 Late in The Changeling, there is a sequence that made me sit up straight, because I think it might have been the source of a vivid nightmare I had as a child. How? Did I catch a scene of this movie on TV and get incepted? Well hold on, because get this: I’m pretty sure I had my nightmare about a haunted gurney when we lived in the old house, which means… I would have had it before this movie about a haunted wheelchair was made. And that officially makes The Changeling my own personal music box from a sealed-up attic. I give it Four ADA-Compliant Cobwebbed Wheelchair Ramps so the stairs are not a big deal anymore, and I rank it high, #89, just after Contempt, which is the first foreign-language movie I ever saw in a theater, and above Hollywoodland, which is underappreciated by the world but overappreciated by me.

hotspur is the videogum name of Luke Rooney, who usually makes the Kessel Run in 17 or 18 parsecs because, like, what is the rush? We will get to Kessel when we get to Kessel, just sit down and enjoy the run for chrissakes.
View all posts by hotspur →
This entry was posted in Movies and tagged childhood nightmare, cobweb and helplessness, evidently no lights work upstairs, george c scott, ghost sounds, haunted wheelchair, lotta spiders in that attic, unnecessary movie review, who ya gonna call? senator carmichael!. Bookmark the permalink.