I know, you’ve been sitting there impatiently drumming your fingers on the table, wondering “WHERE ON EARTH is my Eurovision recap courtesy of Gnidrah, I do hope she hasn’t fallen down a well and is incapable of enjoying this year’s magic and sharing it with me”. Panic no more. It is here. As experienced for real (all pics by me) in the beautiful Portuguese capital Lisbon. 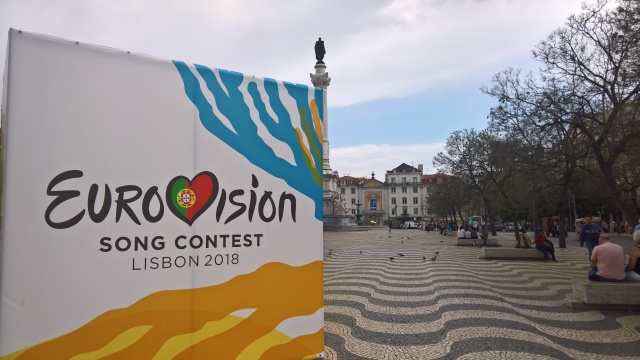 As you might imagine, there is quite a lot of branding around town, including a massive fan village on the river front, alerting you to the fact that there is a song contest in town. HA! As if you’d be there and not know! (I’m looking at you, confused Canadian tourist who asked us for directions).

I am lucky enough to have visited Lisbon before, so during the touristy parts of this trip we tried to see things that we had not had time to visit before – the main one being the fascinating area of Belém.

That’s a MASSIVE monument to explorers like Vasco da Gama. The main street is also where you’ll find Pastéis de Belém, home of custard tarts unlike any other. We ate them fresh out of the oven, a delightful experience. 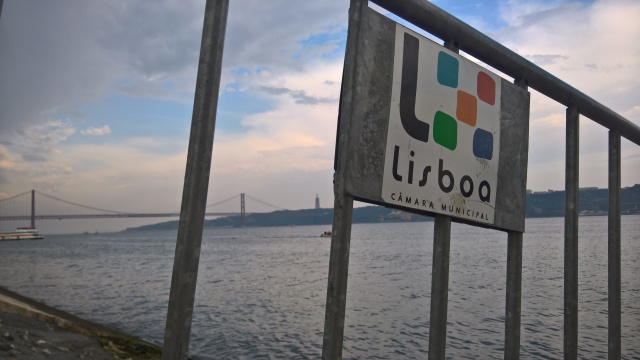 But let’s be real – you’re here for the pop. So join me as we head over to the Altice Arena with 20,000 other Eurofans, for the first semi-final! This one has some traditional big-hitters, some dark horses, some – what’s that security guard? I can’t take my Greek flag in because it’s “too big”? My friend can’t take his rucksack in because “he’s a man”, but I can take my handbag in because I’m a woman? Welcome to event security, 2018-style.

We finally make it inside and find our seats, which are directly above what they call the green room, the sofas where all the performers nervously sit and wait to find out if they’ve made it through to Saturday’s grand final. Watching them watch the competition is almost as fascinating as watching what’s on stage! Our seat-mates are some Portuguese girls at their first ever Eurovision, beside themselves with pride and excitement. By the end of the night they can’t even speak, so hoarse have they sung themselves.

On with the songs! First up, it’s Azerbaijan. Aizel sings X My Heart, and it’s not a bad way to open the show. Took me a while to work out it was “cross my heart”, rather than “ex my heart”, all right over there grandma, need a sit-down and a cup of tea yeah? I like her staging, those big white plinth-type things and Azerbaijan has a 100% success rate when it comes to qualifying.

Up next, it’s Iceland with our first ballad of the night, Our Choice, sung by Ari Ólafsson. “That’s put years on me”, says Eurofan C.NEXT!

Albania could be one of those aforementioned dark horses – this is Eugent Bushpepa with Mall, a song about how much he likes shopping. NOT REALLY.

And now to Belgium. I still love listening to Blanche’s City Lights from last year’s show, a really clever song. Following in her footsteps is Sennek, with A Matter of Time – and I can’t be the only person to hear Bond themes echoing through this tune. I do really like it, but I can’t help but fear that something has got a bit lost on that big Euro stage.

Time for a Gnidrah favourite! Get up and dance with Czech Republic’s Mikolas Josef and Lie To Me!

Oh my days I love him. It’s high quality pop and he managed to get through it without saying the naughty word that features in the original…

We’re going from the sublime to the ridiculous now, I’m afraid, as we tone things right down with Lithuania’s entrant, Ieva Zasimauskaité. Her song is called When We’re Old. If you can’t wait to find out what happens at the end, **SPOILER**, I’ll tell you – a random bloke turns up on the bridge and she sort of hugs him. It’s that exciting.

Yeah anyway – you might have heard that Portugal decided to strip things right back with the presentation this year, no big LED screens, just all about the music. Israel, our next entrant, took in all of that – and sent this:

It’s Netta, with Toy. Pre-this week, this was the bookmakers’ favourite to win the whole thing, and from the reaction it gets in the arena, I can see why they’d say that. If I am 100% honest, this is not my favourite entry this year. At its core there’s a great song, but I am not a fan of the clucking, etc. Just my taste and I totally get why it is so loved. Netta is very much embracing the whole Euro experience, and a trip to Tel Aviv next year could well be on the cards if the votes go her way.

A tough act to follow, but that task falls to Belarus, as Alekseev sings Forever. Well, he doesn’t sing forever, he does actually stop after three minutes. This song is up and down for me, but does feature a cracking gimmick with a bow and arrow and some roses. Full marks for that.

I wonder if Estonia could be another of our dark horses – see what you make of La Forza, by Elina Nechayeva. It’s aided by some clever staging and let’s face it, stunning vocals. Little fun inside-the-arena note: when she finishes, she steps out of the skirt and zips off stage in a pair of white leggings, waving at the crowd!

My view of the green room, as the performers sit and wait for results

Our next tune is Eurofan L’s favourite this year – Bulgaria’s Equinox sing Bones. It’s definitely a grower, and I really like how they swap leads so confidently and competently (not always a Euro given)

FYR Macedonia pleases me by bringing back one of my favourite Euro tropes, that of singing forcefully into another performer’s face – their entry is Eye Cue, with Lost and Found. What gets lost is part of the singer’s dress. As for found, I can’t help you at this stage.

Up next is Croatia, the singer is Franka and she’s Crazy! Well, her song is. I don’t mind it at all, and she certainly has strong lungs on her.

We’re at the business end of semi-final one now, and I wonder how Austria will get on. They’ve had a few not so good years after Conchita Wurst’s legendary victory in 2014. This year, singer Cesár Sampson is performing Nobody But You. Great staging, a great voice and a great chance of qualifying, I’d say.

It’s Greece next! Nail-biting for me, and of course, my flag is now languishing in a Portuguese dustbin outside the arena. There were the usual shenanigans around the selection of the Greek entry, but here for us today is Yianna Terzi, with Oniro Mou. It’s a nice song, but I can’t help but feel that the staging is a bit too dull, compared with some of what we’ve seen and what is to come… Hopefully I am wrong.

Another of our big hitters now, it’s Finland – Saara Aalto finished in second place in the UK X Factor a couple of years ago and now she is singing Monsters to hundreds of millions in Eurovision!

Another incredible reaction inside the arena, and what a performance from Saara. Surely a qualifier – and maybe even a top five result in the final?

Hang on in there, we’ve only a handful of songs left to go! Armenia are our next performers. Sevak Khanagyan is singing Qami. I’m ashamed to say that I have zero memory of this one. In my defence I was staring at Mikolas Josef in the green room.

Switzerland next! I actually have a lot of time for this. It’s ZiBBZ, with Stones. Fire things! Drums! Loud noises!

What will happen with our penultimate entrant, Ireland? A pretty song but Ireland has had a poor record in recent years, not qualifying for the final since 2013. Here’s Ryan O’Shaughnessy with Together:

AHHH! They did it! They put the lads from the video in the performance! This surely is a masterstroke. The dancing is lovely (I found it did distract a tad from Ryan, but that could be the very idea) and I think it must surely qualify.

This is Greek singer Eleni Foureira (born in Albania, and here representing Cyprus) and within about 27 seconds of this performance finishing, she was the favourite to win the whole damn thing. I LOVE IT.  The sound a drag queen makes when this drops in the club is something very special indeed, and I was privileged to witness it just a couple of hours after the end of this show.

So now we have our wooden presenters back on stage (you may know one of them, Daniela Ruah, as I am told she is in NCIS), to introduce some videos about Portugal (the girls next to us were MORTIFIED), and of course, bring us the results of the voting. In no particular order, here are our qualifiers for Saturday night’s grand final:

So many of our friends are through! Hooray! Sadly, we have also lost one or two along the way (notably Greece and Belgium) but all in all, Eurovision 2018 is off to a great start. And I was lucky enough to be there. See you soon for the next installment of AMAZE.

Television, books, music, sports, cooking. I only get paid for one of them. (Update: two of them!)
View all posts by gnidrah →
This entry was posted in Fun Stuff, Music, TV, Uncategorized and tagged "music", eurovision, friends, fun, holidays, lisbon, living our best lives, portugal, travel. Bookmark the permalink.